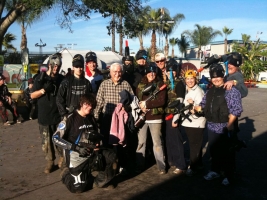 Armed and dangerous, the emunications team set out on an arguably friendly game of paintball. Quality assurance teamed up with design for what we call, "shooting fish in a barrel" - and by fish, we mean Jason and Kevin. On just the second game, I spotted someone atop a building looking down on my teammates. That someone was Jason, who seconds later took a swift paintball to the face. Sure he was on the same team, but he's just a programmer - no need to fret.

On the last game of the day, I took it upon myself to do what so few have had the opportunity to do...

Vastly outnumbered, our team had to play smart. After a long exchange of fire between our two teams, I made an attempt at sneaking around the back of the enemy. Once in position, I saw an opportunity of a lifetime; there stood Kevin shooting back at my only remaining teammate. I took aim and fired. 4 welts later, Kevin was out.

Alas, my team ended up losing the final game, but I left feeling like a winner (insert evil laughter here).

I'm sure Jason and Kevin have a much different story...

Ryan Martin lives in Sugar Land, TX where he’s the lead designer at eMUNICATIONS.com. With over 10 years of experience he’s worked with clients such as Visa, Pepsi and Cessna Aircraft Company.

You can reach Ryan by emailing him: ryan at emunications.com